A Confident Macy’s Sees Momentum Sustaining Through the Year – WWD Confidence is building at Macy’s and the outlook is bright right through holiday 2021 and beyond.

“This will be a gigantic gift holiday. We are approaching it that way,” Jeff Gennette, the chairman and chief executive officer of Macy’s Inc., told WWD, just after the retailer reported a strong first quarter, marked by better-than-expected top- and bottom-line results and a swing to profitability.

Macy’s Inc.’s net income in the first quarter ended May 1 came to $103 million versus a loss of $3.58 billion in the year-ago period when stores were temporarily closed due to the pandemic beginning in March 2020.

For holiday 2021, Gennette expects to see strong demand for fragrance, fine jewelry, boots and booties, handbags and home categories as well as a good balance in the demand for casual and dressy apparel. In addition, “People are going to go after Christmas decorations aggressively,” Gennette predicted.

He also expects New Year’s celebrations “will be at a whole other level” and should be preceded by increased demand for fashion for partying, like dressier dresses.

The retailer reported Tuesday it outperformed first-quarter sales expectations across all three of its brands: Macy’s, Bloomingdale’s and Bluemercury, riding momentum from the fourth quarter. The results were driven by the positive effects of the government stimulus program, faster-than-expected rollouts of COVID-19 vaccines, and accelerated execution of Macy’s own strategies, including investments in digital platforms.

“We don’t see this as a short-term pop,” Gennette said during the interview. “You’ve got customers with very low credit card balances, lots of open to spend, and to varying degrees they’ve been cooped up over the last year,” constraining buying fashion for occasions, though that’s picking up. Macy’s, he said, is already beginning to see spending related to going out pick up, whether it’s for dinner, church, or some other occasion. He also cited luggage as a standout last quarter, suggesting people are traveling or getting ready to travel. Many categories fueled by the pandemic haven’t slowed down either, namely home, sleepwear, kids, designer handbags, sunglasses and watches, he said. 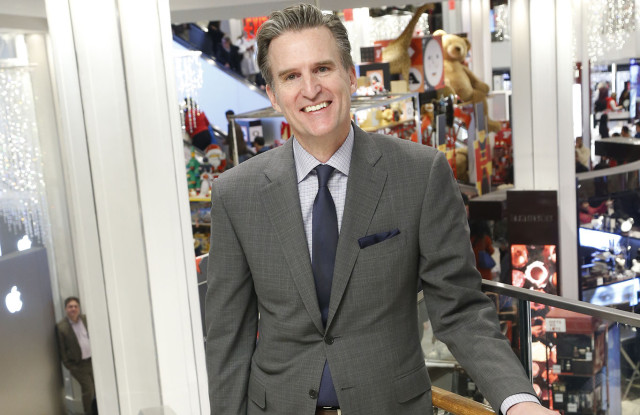 Still to come: A pickup in shopping for wear-to-work clothes which Macy’s hasn’t seen yet but expects soon. Gennette also suggested back-to-school business should be good as classroom attendance becomes mandatory again. Macy’s has started to build inventory back, which was 23 percent down last quarter, versus 27 percent down in the fourth quarter.

Another sign of confidence in the future of the business came last week when Macy’s Inc. revealed plans to spend $235 million to enhance the Herald Square area with improved transit infrastructure and access and creating pedestrian-friendly space. To fund these upgrades, Macy’s plans to get a commercial office tower developed above its Herald Square flagship, as reported.

The first-quarter performance prompted the company to raise its full-year 2021 guidance. Sales are now seen coming in at between $21.73 billion and $22.23 billion, versus previous guidance of $19.75 billion to $20.75 billion.

Adjusted diluted earnings per share are seen at $1.71 to $2.12, versus the previous guidance of 40 cents to 90 cents. To sustain the momentum, Macy’s has been implementing strategies to attract more customers under age 40, where the retailer has long fallen short, including adding categories not previously carried and adding payment options. Emerging categories are toys, pets, food and wine, health and fitness, through vendor direct or own inventory. Another major objective is reaching $10 billion in digital sales by 2023. It’s around $8 billion annually currently. Backstage, the group’s off-price department, is opening inside 47 Macy’s locations this year, and should end the year with 270 Backstage departments. Backstage also has a handful of freestanding locations and two new ones in the 25,000- to 30,000-square-foot range are opening at the end of this month, one in the Dallas Fort Worth area.

That’s part of the company experimenting with developing “ecosystems” in the Dallas, Atlanta and Washington, D.C., markets involving launching smaller off-mall brick-and-mortar formats including Backstage and the Market at Macy’s, which is described by officials as a “curated assortment of the best of Macy’s branded fashion within an easy-to-shop and open environment.” The format reflects Macy’s intent to be less dependent on malls, provide greater convenience in an updated setting and become more relevant to customers. Later this year, three new Market by Macy’s will open, as well as the first small format Bloomingdale’s store, to be called Bloomies, in the D.C. area. While innovative, Market at Macy’s won’t have a material impact on the corporation unless the format proves successful and years from now operates many locations across the country.

“We are seeing our core customers coming back to shop and they are spending more,” Gennette said, during a conference call with investors and retail analysts. “Behavior is improving among our Star Rewards credit card customers.”

In the first quarter, Gennette said Macy’s saw 4.6 million new customers, 1.6 million of whom were “dormant,” meaning they didn’t shop Macy’s for at least a year.

Macy’s, he said, is “hyper-focused” on goods and platforms attractive to consumers under 40, including toys, health and fitness and contemporary fashion. Asked what the percentage of Macy’s customer base is under 40, Gennette replied, “When you look at the total, it’s not as high as we want. We’ve got a strategic playbook on how to get it higher.”

Online, Macy’s created a contemporary sitelet in men’s and women’s, and enhanced the beauty presentation by adding social media channels and virtual try-on. “The next big deal is live video,” otherwise known as livestreaming, Gennette said. “We want to make live video events as fun and as social as experiences in the stores.”

Earlier this year, the Macy’s Media Network was launched. It monetizes digital traffic, creating a new income stream. According to Gennette, there’s been “immense support from vendors across categories, and leading up to Mother’s Day, the network ran 130 vendor-funded advertising programs in the first quarter and delivered more than 300 million offsite media impressions, resulting in a traffic increase of more than three million to the Macy’s website.

During the interview, Gennette did address potential headwinds, including inflation. “We are watching that carefully to see if it does retard consumer demand,” Gennette said. “What I am proud of is that our AUR (average unit retail price) is strongly up, 9 percent to 2019 levels. Regular price selling is also up. I’m not overly concerned about inflation.”

Rising delivery costs, partly due to Macy’s growing digital business, have already been built into Macy’s guidance, he said. The company is focused on curbside pickup and a higher penetration or orders being fulfilled out of stores, both of which help offset delivery costs. Macy’s is also focused on providing same-day delivery and is working more with regional carriers to insure speed.

Macy’s website is engaged in drop shipping in certain categories, and management is considering converting it to a more formal marketplace format. “We don’t have any plans that we are announcing but we are always reviewing,” Gennette said. If the marketplace model was adopted, “We would make sure it’s curated with the right brands and merchandise.”

Gennette also said Macy’s has simplified pricing in men’s departments by eliminating a lot of the point of service and couponing. “We are making values clearer to the customer. Whenever we do that, we get better conversions,” he said.

Macy’s 2021 capital budget of $650 million is weighted toward investments in digital, data analytics and supply chain.

Meanwhile, Macy’s has been streamlining its store fleet, and has 60 more closings scheduled for this year. In the first quarter of this year, there were 572 Macy’s stores, counting all formats. Including Bloomingdale’s, Bluemercury and Backstage, Macy’s operates 787 sites.

Macy’s hasn’t yet revealed its plans for the Fourth of July celebration and is working with New York City on those. Last year, in the midst of the pandemic, the fireworks were held over three days in different parts of the city to avoid what in past years has attracted millions of spectators for a huge fireworks display on the holiday itself. A savvy shopper has shared details of a major discount being offered by Sainsbury’s. The …